Tahitian vanilla comes from the crossing of different varieties of the vanilla tree. But let us briefly tell you how it happened …

The first examples of vanilla bean, a name that was not yet in use at that time, were imported to Europe in the 16th century by the first Spanish conquistadors. In fact, in Central America, indigenous peoples used these fruits for both their fragrant and medicinal properties. The vanilla pods were therefore sent to Spain and introduced to the king. Subsequently, the product entered fairly quickly in the preparation of chocolate. Later, the vanilla bean was studied and named Araco Aromatico (1651). It was not until 1658 that she took the name Vaynilla from William Piso.

Under the reign of Louis XIV, France introduced cuttings of the vanilla orchid on Bourbon Island now called Reunion Island. If the plant grew there without difficulty, on the other hand, it did not bear fruit. The plant was therefore kept as an ornament.

In 1836, during a trip to Mexico, it was discovered that a small bee, the Melipona, endemic to the region, was responsible for pollinating the vanilla orchid.

Finally, in 1841, a young Reunionese slave named Edmond, invented a way to manually pollinate the flower. This method is still used today. He took a small stick of wood to introduce the pollen into the stigma, the “marriage”, and thus obtained the coveted pods.

From then on, Bourbon Island became the second center of vanilla production after Mexico. Thus, the cultivation of vanilla spread rapidly in all tropical regions as far as Tahiti where it was introduced in 1848 .

In Tahiti, a particular variety

From its discovery to the present day, vanilla has developed into different varieties, more than a hundred, but only three of them are marketed. It is vanilla fragrans or planifolia , also called Bourbon vanilla, vanilla x tahitensis called Tahitian vanilla and vanilla pompona . Vanilla x tahitensis is mainly cultivated in the Pacific, French Polynesia , Papua New Guinea and Indonesia.

The species vanilla x tahitensis is thought to be derived from the crossing of vanilla planifolia and vanilla odorata . Its large-scale cultivation in the high islands of Polynesia began in the 1880s. It reached up to 200 tonnes before the 1930s to the 1960s and finally dropped drastically in the 2000s until 2018.

However, since 2013, a recovery plan for vanilla cultivation has been put in place and should yield results in the coming years.

What makes Tahitian vanilla so popular?

Vanilla X Tahitensis is currently the most sought-after vanilla and the most used in pastry, cooking or even in perfumery. The greatest chefs use it preferably because it has several characteristics that make all its interest and charm:

– its incomparable and unique taste and aroma, conferred on it by the presence of aniseed molecules,

– its atypical texture which is particularly appreciated,

– its strong scenting power, which is equivalent to three times that of Bourbon vanilla ( V. Planifolia ).

These qualities make it an expensive product due to its rarity. Nevertheless, its high price is favorably counterbalanced by its aromatic power. 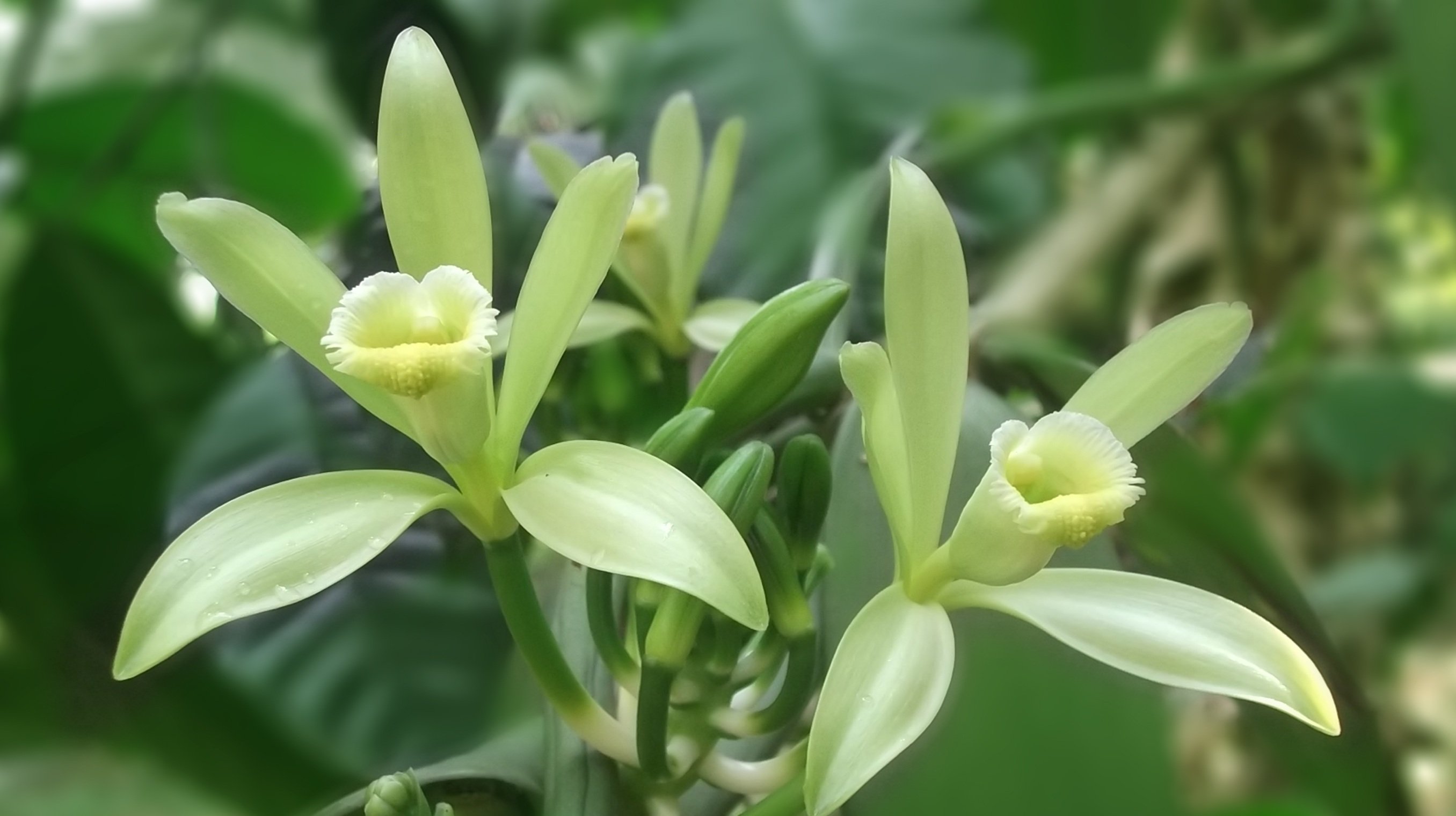 Climbing liana from the orchid family and native to Central America, vanilla grows naturally on the edge of the undergrowth. The hot and humid forest offers it both protection against the sun, a soil rich in humus and the support of the trees which serve as stakes to develop in height.

French Polynesia has ideal growing conditions where rainfall and sunshine, with a fairly humid dry season, favor the budding and fruiting of the plant.

Vanilla cultivation methods have evolved over time, moving from cultivation in a natural environment to controlled cultivation in greenhouses, in order to guarantee, as part of the recovery plan put in place by the local government, better performance, methodical maintenance and good sanitary condition of the entire production.

Until the mid-2010s, vanilla cultivation in Tahiti and in the high islands was practiced in a natural environment, on living supports which also served as shade houses. However, this type of crop, if it had the advantage of being economical in terms of investment, presented many difficulties. Indeed, often arranged on rather steep slopes, the plants were difficult to access. Living stakes competed with the vanilla plant, and the plantations were regularly prone to fungi.

In order to overcome these difficulties, some producers have imagined and reflected on more productive cultivation methods. This is how shade culture came into being.

From now on, the supports are approved. In wood or cement, arranged in such a way as to allow optimal use of the space used, there is no longer any competition between the stake and the vanilla tree.

The base receiving the vegetable compost (often coconut husk) is above ground, on a slab, which protects it from fungi.

The use of greenhouses can also protect the plants against viruses potentially carried by insects.

Such an implementation is certainly more expensive but has the advantage of guaranteeing better production and better quality.

As part of the production revival put in place by the local government since 2016, producers can benefit from aid for the installation of vanilla greenhouses and their maintenance.

The method of preparation consists in promoting the formation of the perfume, and allowing the good conservation of the pod. Each phase is important.

All of these operations result in a weight loss of 40 to 50% compared to the initial weight.

The preparation of the vanilla is spread over a period of 4 to 5 months.

Pod washing:typical of Tahitian preparation. The pods are washed with clean water.

Sunshine: Exposure to the gentle morning sun should last 3 to 4 hours a day for about a month.

The rest of the day the vanillas are stored in sheets and crated to promote perspiration.

Gradually the vanilla will lose weight and wrinkle. Throughout this phase you will have to work the vanilla by smoothing it and flattening it between the fingers.

Sorting:when the vanilla is sufficiently sunnyit is put in a shady and ventilated place for 40 daysto lower its humidity level.

The packaging:the vanilla is sorted by length and quality.

Maturation or refining:the last stage is carried out in boxes where the vanilla is locked. Its taste and fragrance will greatly improve and refine.This stage will last from 60 to 90 days. 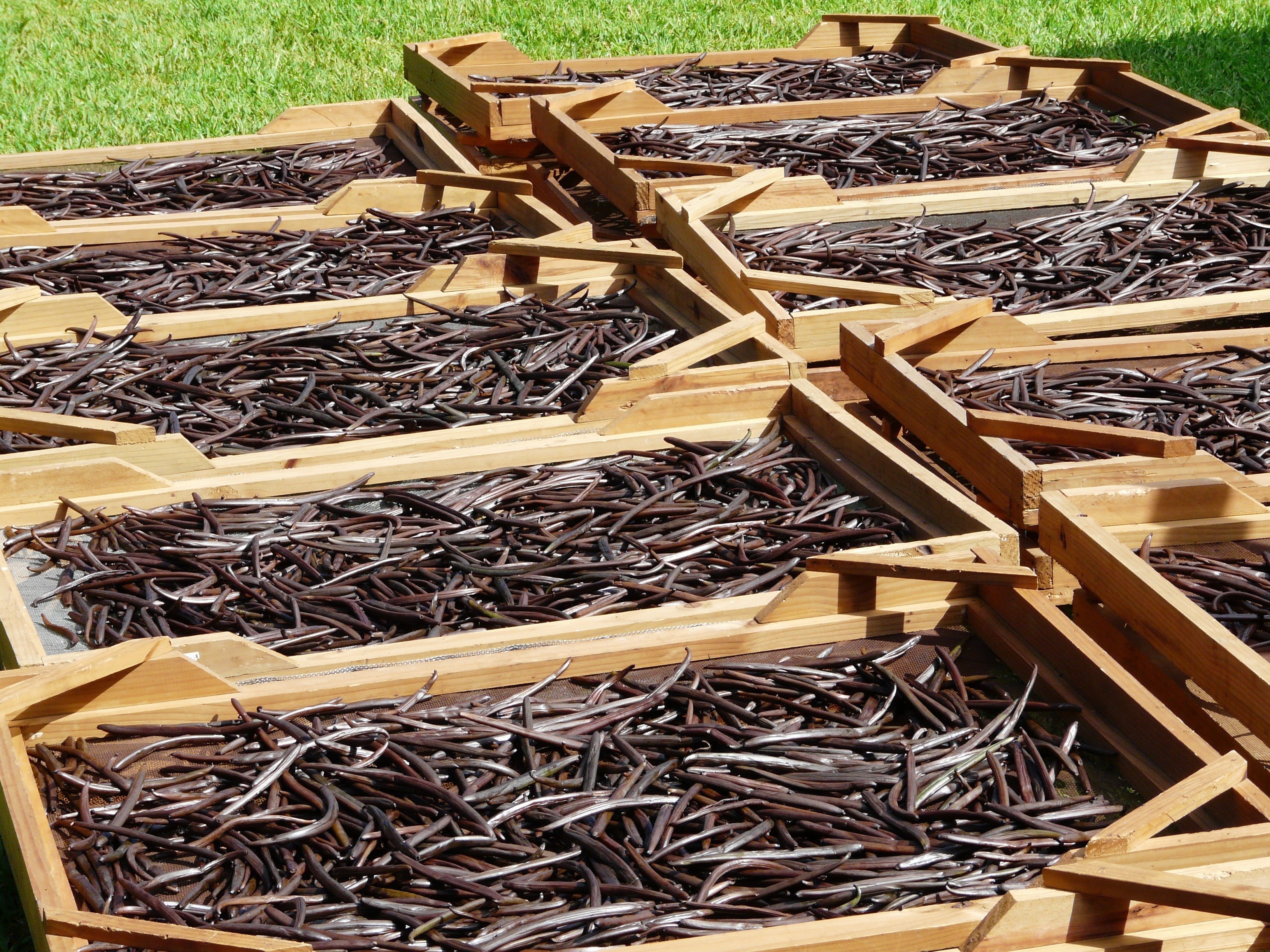 Tahitian vanilla is distinguished from other vanilla by its aniseed molecules (anisic alcohol, anisic acid, anisyl acetate among others)

Characteristics of a good Tahitian vanilla

Tahitian vanilla contains very little vanillin. The humidity level is between 40% to 55%. The aroma is spicy with scents of anise. it is a rare vanilla, more expensive but requiring a lower dosage.